I am a Designer based between Sheffield and Cebu. Currently I work with clients on branding, packaging, and website design projects.

Website designed by Philippa, built by Kim, with help from Kindred Studio.

Shanghai is fast becoming a popular transit point for many travellers – particularly those with transpacific flights. China Eastern seem to constantly be topping the list on prices – when I was searching for my own flights, the next airline up was charging almost double what CE was. So it’s no surprise that people are choosing CE as their gateway to Asia.

I’d heard a lot of bad things about the airline and Shanghai Pudong airport but I booked the flights anyway. Reviews tend to be at either end of the spectrum. Sometimes you just have to experience things yourself and to be totally honest I was pleasantly surprised by my experience with China Eastern, how smooth the process was for entering China and Shanghai as a city in general!

In Shanghai (and a few other cities in China) there is a process in place for visitors wanting to enter China visa-free for a few days. Overall it was a bit slow due to the language barrier but that’s completely understandable. I had actually booked flights from Cebu to Honolulu via Shanghai, my original layover of 8 hours suddenly changed to 32 hours shortly after booking. But this actually ended up being a blessing in disguise; I saw it as a chance to explore a new city and tick a new country off my list and I’m so glad I did! For those of you that have an upcoming layover in Shanghai I’ve made a quick summary of all the things you need to know for your arrival, you can find this at the end of the post!

What I’ve found in China (and Hong Kong) is that it’s pretty normal for people to join your table when you’re eating out. Some people view this as an outdated practice and a way for the establishment to make more money but when you’re heading to a well known place like Jia Jia Tang Bao and there’s limited seating capacity, I actually don’t mind it. If I’m travelling on my own, I don’t need a table for 5 people, and if I’m only in a place for a few days I don’t mind taking a spare seat to cut down the queueing time.

That said, Jia Jia Tang Bao was one of the first places I wanted to visit in Shanghai after hearing that they did amazing xiao long bao. I had been obsessing over these in Singapore so felt keen to try some that weren’t from Din Tai Fung. There was another place a bit further away called Fuchun Xiao Long Bao that I’d heard was good too but didn’t have time. If you’re there for a bit longer, maybe you can try both! The place itself is quite small with only about 6 tables and plastic stools. You can see the dumplings being made fresh behind a screen and there are red paddles hanging on the wall to show you what flavours are still available. These are written in Chinese so if you’re going later in the day this is probably a good time to use the google translate app – if you don’t speak the language. The best time to go though is probably around 10am when the queue isn’t long and everything is still available. If you want to pork xiao long bao you can only order them in the morning – whether this is due to them being considered a breakfast item or selling out quickly due to popularity, I’m not sure. Probably a mixture of both. If you like crab xiao long bao, they serve these all day. 12 dumplings was roughly about £2, which is amazing! In comparison to Din Tai Fung, the dumplings had slightly thicker skins but they were still great!

I feel like I say this a lot but Tiger Sugar is my favourite bubble tea place, they were the first ones to introduce the brown sugar milk tea concept! If you’ve never tried it before you need to try it here first. I always thought that I wasn’t a bubble tea person but it turns out I’d just never had a good one until I tried them in Asia! This particular branch is located around the Tian Zi Fang area – not within the maze of shops, but on the streets surrounding it. I think it’s pretty new so you won’t find anything about it by googling – believe me, I did a quick check before I visited. Priorities. 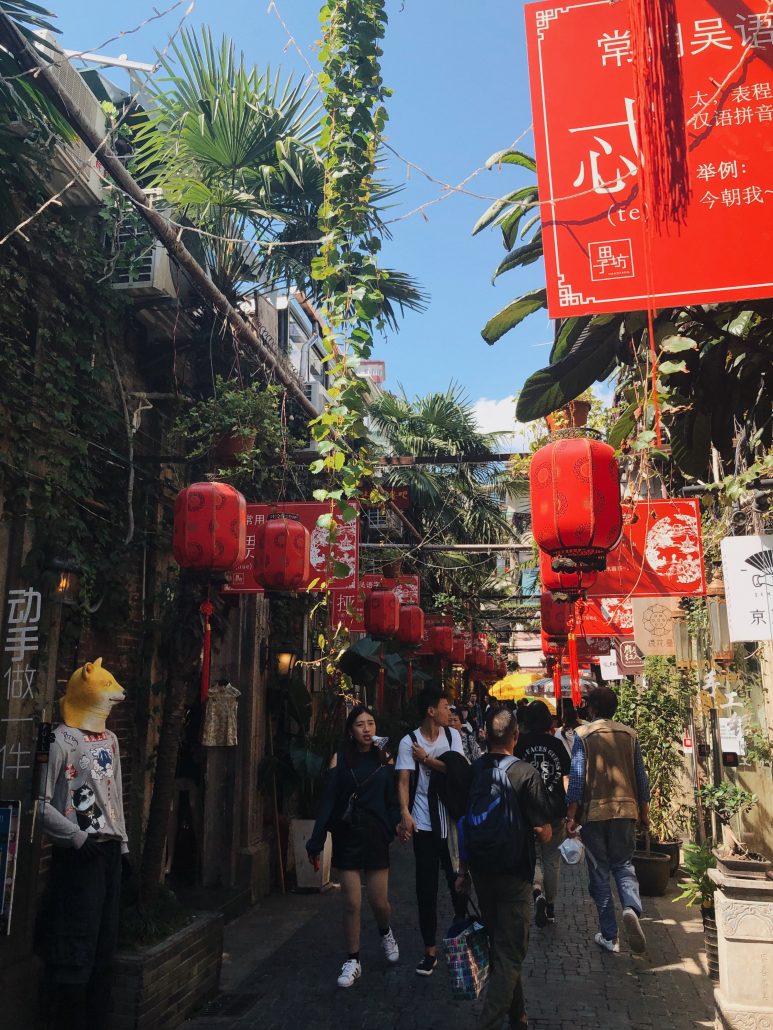 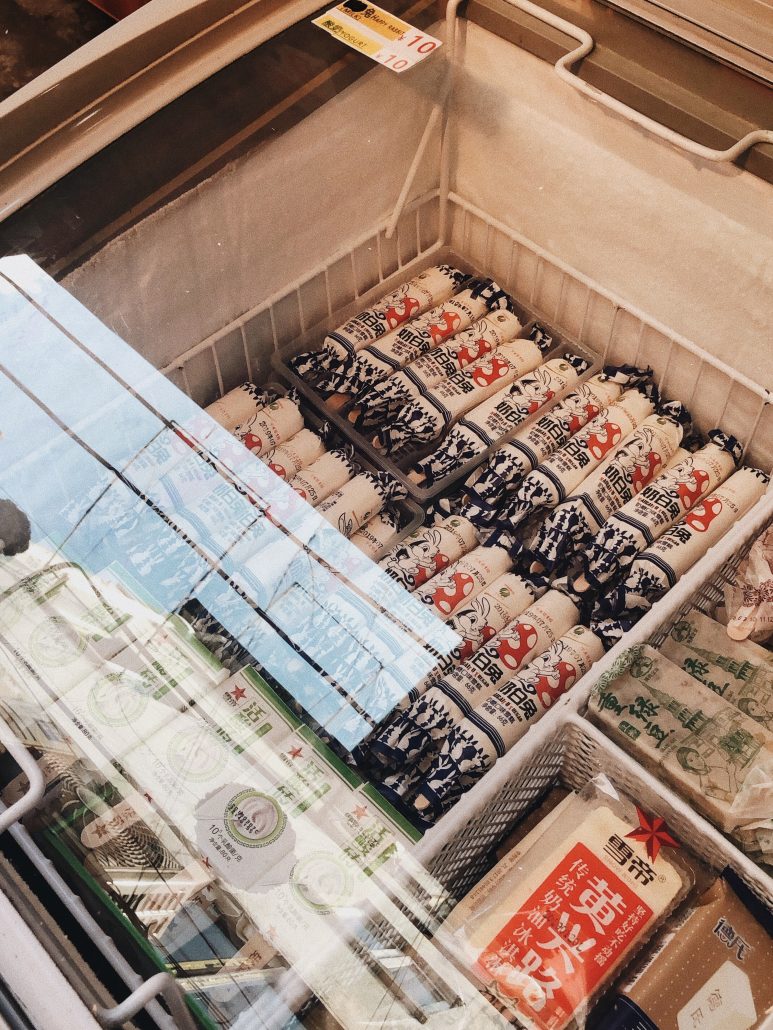 When I was finding my way to Tian Zi Fang I was surprised by how European the streets felt. The big, leafy trees lining the roads and the ornate building fronts reminded me of Barcelona so much. This wasn’t really something I expected in China. I later learnt that during the 1800s, Shanghai was actually divided into French, British and American concessions. I knew a bit about the British being in Hong Kong and Singapore, and the Spanish and Americans being in the Philippines but I was surprised that I’d never heard about this until now. Tian Zi fang is actually part of what was the French concession – which made perfect sense! It is the perfect little area to explore on a Summer’s day, filled with little alleyways, plants growing up the walls and a few bistro-style places to eat at. And as with most things in the centre of Shanghai, fortunately you’re never too far away from a Metro.

Other notable places worth checking out if you have time are Yang’s Fried Dumpling, Starbucks Reserve Roastery (one of the biggest Starbucks in the world) and The Bund at night!

There is a big list of countries that are allowed to do this (including the UK and US), you can check if yours is included here. Remember, you are not actually applying for a ‘Visa’ but a ‘Visa-free Transit’, there’s a difference. This is totally free and you can get one for up to 24, 72 and 144 hours but there are a few rules you need to bear in mind. You can only get this if you have proof of a confirmed seat on an onward flight (note: don’t worry if you’ve not checked in for the onward flight yet, this doesnt mean they need to see an exact seat number on a boarding pass) just a copy of the booking showing your final destination will be fine. You may only apply if the start and end countries are different. E.g. you could apply for the Visa-free transit if you were flying from the Philippines to the US (via Shanghai). It’s also worth noting that I thought that I would need to apply for the 72 hour Visa-free Transit since I’d be there for 32 hours, but the check-in agent told me that it’s actually done by days rather than hours. So if you arrived at 1am on Monday and left at 11pm on a Tuesday this would be 34 hours, but you would only need to apply for the  24 hour VFT since you leave the next day. I would also recommend making things easier by printing two versions of your travel documents, one in English and one in Chinese. It doesn’t take long, makes everything super clear and prevents any potential miscommunication.

Getting around Shanghai is actually suprisingly easy, I was worried that the language barrier would make it difficult but all the station names are in both Chinese and English. And like anywhere, you can download route planning apps to help you.

To get from the airport you can either take the Maglev train (short for magnetic levitation) – which is the fastest train in the world, or you can take the metro. The metro is cheaper and will get you to the centre of Shanghai in about an hour. The Maglev train costs a bit more but will get you there in 7 minutes, it only has one stop. I would advise experiencing the Maglev if you are not in Shanghai long. At the airport there is a ticket desk specifically for the Maglev, if you are only travelling one way you can show them your flight ticket and you will recieve a 20% discount. I believe if you book a return ticket, theres no need to show your flight ticket as the discount is automatically applied. The Maglev will take you to Longyang Road where you can buy your Metro tickets and transfer to a Metro line. If you are stopping over for a night or two, I would advise getting a 3 day ticket. This gives you unlimited travel on the whole Shanghai Metro network. Remember Metro and Maglev tickets are purchased separately, you can’t use the same ticket/card.

In China Google, Facebook, Instagram and Whatsapp don’t work so you’ll need to download a VPN to be able to access these. Activating the VPN will make your phone think you are somewhere like the US. I recommend downloading ‘Betternet’ VPN, it’s free on the app store (upon the time of writing this) and works perfectly. It’s also worth getting the Google Translate app (not just for China but for anywhere), you can download the languages you need for your journey and make instant translations even when you don’t have any internet. You can also use the camera mode setting on this app and hover over live text and it will translate it for you! So useful if things like menus aren’t in English.

I hope this post was helpful, and I hope if you have an upcoming layover in Shanghai you enjoy it as much as I did! Feel free to leave a comment if you need help with anything! You can find more posts like this in the Travel section.